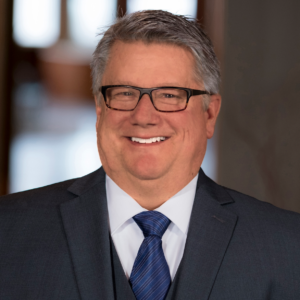 Oshkosh Door Company, an industry leader in door manufacturing located in Oshkosh, Wisc. announced its new president. Chris Calawerts, who led the organization’s sales and marketing for the past two years, assumed the role on January 1, 2017.

Gene Miels, after serving as president and chief operating officer for 11 years, retired to pursue other opportunities.

“As CEO of Oshkosh Door Company, it is my job to make sure we are always thinking about succession planning,” said owner Todd Robinson. “I am pleased that we have been proactive in this planning.”

Calawerts is not new to leading companies—nor to the role of president in manufacturing organizations. He spent the first half of his career in commercial and residential construction products and the second half in retail manufacturing and distribution. He has strong leadership, finance, operations and sales growth skills which have been demonstrated in roles that span from vice president of operations, sales and marketing to president.

“When we first met Chris, we knew he was a special type of leader,” said Robinson. “He has the proven background and the complimentary skills our organization needed then and needs now.”

“I am honored to be entrusted with this responsibility,” said Calawerts. “Having spent two years with Oshkosh Door, I know its potential, which has been built on an incredible history. My focus now will be to build a team and a culture at Oshkosh Door that is centered on opportunity. It will be our people—motivated, trained, and driven to succeed together—who will advance us for our next century. My intention is for Oshkosh Door Company to be a people-centered organization.”

Calawerts spent 20 years with VerHalen, Inc., including serving as vice president of operations and then as president. His roles covered areas of operations, customer service, sales, marketing, finance and administration. He also served as a business consultant for several companies, which brought him to Encap, LLC, where he led their business development activities and served as president.

Since joining the Oshkosh Door Company, Calawerts has led the sales and marketing operations. During his time, his team has rebranded the company and grown sales. He has also served as a member of the senior leadership team, making key strategic leadership decisions.

“At Oshkosh Door Company, we like to say that we are constantly opening the door to possibilities with our products and our people. This next chapter in our history will be filled with tremendous potential as we continually challenge this talented and caring team who want to make a difference,” said Calawerts. “It’s a great time to be Oshkosh Door!”

“I’d like to take this opportunity to thank Gene Miels for his commitment to Oshkosh Door for over a decade, said Robinson.” Gene’s leadership is best described in the work he has done to guide us through a Lean transition.”

Part of Gene’s legacy is visible in the improvements he made by leading the company on a successful Lean journey. He put the principles in place to develop an efficient operation with the ability to deliver some of the shortest lead times in the architectural wood door industry. Under Gene’s leadership, the Quick Ship program grew to nearly 30 percent of shipments.

About Oshkosh Door
Oshkosh Door Company dates to 1853, shortly before the Civil War, when the City of Oshkosh was just forming. Edward Paine and his sons moved their saw mill from New York to establish The Paine Lumber Company which in short time dominated the millwork industry. Today, the company’s ten-acre campus remains in Oshkosh, Wisconsin, where all the door manufacturing takes place. The company specializes in quick delivery of custom architectural wood doors that can be found in commercial applications worldwide. The company employs 130 people. To learn more about Oshkosh Door, visit www.oshkoshdoor.com.